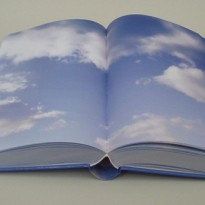 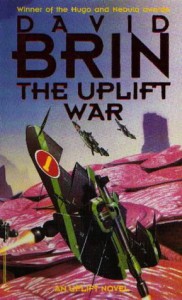 Christmas 2010: I realised that I had got stuck in a rut. I was re-reading old favourites again and again, waiting for a few trusted authors to release new works. Something had to be done.

On the spur of the moment I set myself a challenge, to read every book to have won the Locus Sci-Fi award. That’s 35 books, 6 of which I’d previously read, leaving 29 titles by 14 authors who were new to me.

While working through this reading list I got married, went on my honeymoon, switched career and became a father. As such these stories became imprinted on my memory as the soundtrack to the happiest period in my life (so far).

The Uplift War is book 3 in Brin’s Uplift Saga and the second from the series to win both Locus Sci-Fi and Hugo awards (in 1987, following Startide Rising’s success in 1984).

Brin’s work in the Uplift universe continues with another trilogy, The Uplift Storm, but this marks the end of the original trio – and it’s a pretty mixed bunch. Book One, Sundiver, is a rather forgettable affair, altogether too simplistic in its outlook. Book Two, Startide Rising is a much better offering, with haiku-spitting space-dolphins in an intergalactic chase and prison-break scenario – an adventure to get your teeth into!

Which brings us to Book Three, The Uplift War: from the title I was expecting a full-on Earth (and allies) vs Nasty Aliens, but that’s not quite what we get. Garth is an out of the way planet, settled primarily by Earth’s client-race – chimpanzees. Yes folks, this is a bona fide planet of the apes – complete with original monkey culture and politics. Following the events of Startide Rising, the galactics are pissed with Earth-Clan – but there are a lot of galactic races and not enough Earth-butt to kick – so one particular race of aggressive avian aliens (Evil Space Chickens) decides to conquer Garth and hold it hostage to try and make Earth-Clan play ball. So the chimps are massively outgunned by the Evil Space Chickens and must resort to gorilla (punny!) warfare. And to add a last bit spice to the mix, the naughty chimps have been covertly conducting Uplift work of their own – trying to help Gorillas reach full sentience – which is a big crime without galactic approval. If this is discovered it will retrospectively justify the Evil Space Chicken invasion and be a major headache for Earth-Clan!

Our heroes involve a plucky daughter of a galactic ambassador, a cheeky chimp pilot and a local rebel girl (as love-interest). It’s fun. It’s not quite as good as Startide Rising, but it’s still pretty damn fun.

If you're looking for a reliable on-the-money reviewer to follow, you wouldn't go far wrong with Nicholas Whyte who sums up the negatives of this book rather perfectly when he says:

“humans (and their allies) rarely lose a battle or an argument; we are rather compelled to cheer for our boys. But more seriously, I think the novel's take on race issues is naïve and complacent. The intelligent chimpanzee characters are not allowed to rebel from the human agenda, yet disply no resentment of the control exerted over them, including their reproductive rights. Those who do make common cause with humanity's enemies get their come-uppance. (The only Bad Human who displays racial and gender prejudice is explicitly South Asian.) I think I would have been happier if the book had explored colonialism and race a little more profoundly.”

I still thought the book was fun, but it takes fairly serious themes and then just sort of flirts with them coyly. I kept wanting Brin to get more feisty – get in there and really make a point with his monkey-man-metaphor! But he doesn’t. He just enjoys telling his tale.

New book?
Yeah
Good?
Yeah
What’s it about?
Planet of the Apes being invaded by Evil Space Chickens.
You read weird books.
I know.
Can I borrow it when you’re finished?
Of course!

If you've not read any of the Uplift Saga yet - start with Startide Rising.
If you liked that, read this.
Simple, no?